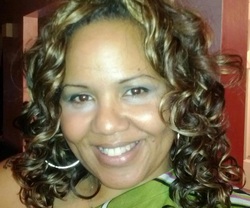 Coming from a loving household, Stacy was a
high school head cheerleader, homecoming queen, star
athlete, and trendsetter. Her friends and family adored
her, and she believed she had it all. Then, out of
curiosity, she began flirting with alcohol and drugs, first beer and bourbon, then
marijuana, then cocaine. The rush of power that came with coke led her into the world of
prostitution, not as a prostitute or even a madam, but a full-fledged, hardcore pimp who
had no qualms about hitting a man or woman in the face if that’s what it took. She
became the infamous Queen B, short for Queen Bitch. Stacy wore the title proudly--
literally—as a tattoo on her right arm.

In her early thirties, she became addicted to crack cocaine, then in order to
support her habit, she sold it and ran a crack house in her mother’s home. After being
under police surveillance for more than a year, she was picked up by one of her best
customers, who turned out to be a state trooper.

The trooper offered her a deal. Become a confidential informant and avoid jail
time and continue using in exchange for her connections. Stacy considered it but knew
that accepting the offer would come with the high price tag of losing her special needs
son to the social workers who were already on her trail. She couldn’t do it.

Instead Stacy began her journey to change her life for the better. Two years later,
she walked into prison to face a four-year sentence, clean and sober with a new life, new

house, new job, new car—and four months pregnant. A model prison, she mentored
more than three hundred inmates while incarcerated. She was allowed outside gate
clearance, which was unheard of, so that she could speak to schools about drug addiction.

When she had been out of prison a year, her mother, who had finally accepted
Stacy back into her life, was killed in a car crash. While still grieving the loss, Stacy
turned to her best friend and Prince Charming. A Vera Wang wedding followed.
A white picket fence. Her two children. Clean and sober, Stacy was living the dream.
Four months later, Prince Charming left her for another woman.

Turning back to drugs was not an option. Giving into grief was not an option.
Neglecting her children was not an option. The only option was to move forward. That is
the ultimate message of THE QUEEN B. The only way out is through, and broken
dreams are no excuse for giving up. Sometimes humorous, sometimes brash, always
inspirational, Stacy Butler is a courageous voice for survival.